I am sure I am not alone in this phenomenon. You're scrolling through your Facebook feed and someone posts something that brings memories flooding back, something you haven't thought of in ages. 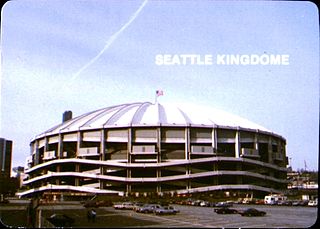 This is where I was taken - Seattle's Kingdome. It wasn't a story of the grandeur that she brought it to mind, it was the occasion of the Kingdome's implosion. I am guessing that it was this local news story that reminded her. (She is a very busy woman and I am certain she is not keeping track of things like this in her spare time.) So now I'm pondering this Seattle icon.

Besides seeing it dominate the skyline, my earliest memories of the Kingdom were of the paper airplane contests that were held inside. (You can read articles from the 1970s & 1980s here and here.) What a great idea! Take a humongous, inside area with a huge open space in the middle. Place circles on the ground with different prizes to be won if your plane lands inside particular spaces, line people up around the upper decks, make sure they put their name and phone number on the paper, and let them fly.

I have very fuzzy memories of being taken to an NFL game, but have no true memories of it myself.

I have spent hours and hours and hours in the Kingdome in the 90s, though. I am a 1995 "Refuse To Lose" convert to the game of baseball and a diehard Mariner fan ever since. I bought tickets to tons of single games for the duration of the Kingdome and continued those first years at Safeco Field and finally also purchasing partial season tickets. (Living overseas has changed how I experience baseball, but that's another post.) I have been fortunate to be a most of the major moments in Mariner history and the Kingdome was a part of those.

This was the fate of the icon... 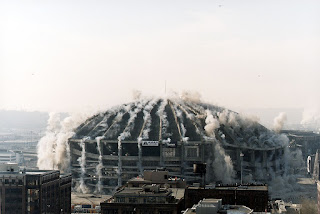 Back then photos were taken with film. I have one, from that morning. It was a Sunday. I was riding up to Crystal Mountain to teach skiing with what is now Outdoors For All. As we drove by, at sunrise, I realized it was the last time I would see the Kingdome mostly intact and I snapped a picture. The colors are pink, there is a full moon hanging above. Prior to the actual implosion they had some work to do in deconstructing some of the monolith to ensure it would actually implode when they pushed the button (or flipped the switch, or whatever they did to make the implosion happen). The picture is at my other house so I can't share it with you here. I titled it "Full Moon, Half Dome".

Seventeen years the Seattle skyline has been without this icon. That was the point of my friend's post. How has it been that long? Yet the life I lived then seemed more than 17 years and 8,000 miles away. Thanks for the trip down memory lane.

Email ThisBlogThis!Share to TwitterShare to FacebookShare to Pinterest
Labels: On this date, SOLSC