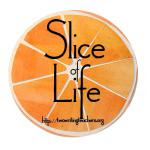 "So what do you think we should do differently next time?" I ask having closed the kitchen door. This was also after I returned from a short trip to the neighbor's house, which I took in order to depart from the escapade that had unfolded after dinner.

"I think you started it off really well."

I agreed with my husband on this point. I knew she was going to melt down thinking that Daddy's observation was anger and had worked to quickly translate so they could hear one another.

"But where did it go wrong?"

Neither of us could pinpoint the moment it had imploded, but we did come up with a game plan for the inevitable 'next time' before emerging from the kitchen. Let's hope we remember the play before the next debrief.
Posted by Kristi Lonheim at 8:00 AM